Do Owls Attack Humans? If So Why?

Owls are generally thought of as being shy and reclusive creatures. But there have been instances where they have attacked humans. This usually occurs when the owl feels threatened, such as when its nesting area is disturbed.

In most cases, the attacks are not serious and the owl will quickly release its victim once it realizes that there is no threat. However, there have been some reports of adult owls inflicting serious injuries with their sharp talons.

If you are ever confronted by an owl, it is important to remain calm and avoid making any sudden movements.

Why Do Owls Attack Humans?

It’s actually pretty rare for owls to attack humans. Most of the time, they only do so if they feel threatened or if their nest is in danger. Sometimes, people can accidentally scare an owl or get too close to its nest, which can lead to an attack.

Owls will attack anything or anyone who approaches their nest, as they may perceive them to be a threat. This can often lead to owls attacking the head and face of an individual, which can result in severe injuries.

Larger owls have enormous gripping strength of up to 500 psi. Their razor-sharp inch-long claws and giant talons can cause serious skin damage and deep lacerations, including taking out a human eye. And like an eagle, this bird can fly at great speed.

Birds of prey such as owls can attack humans if they are confused by the town’s noises and lights. Animals in the wild can become easily confused and may cause them to attack humans. If you see an owl in the town, it is best to leave it alone.

Many people are wondering, are owls dangerous? The answer is yes. Owls can be very dangerous to humans and their pets. They are known for their hunting skills and have sharp talons and powerful, scissor-like beaks that are designed for tearing flesh.

These birds of prey usually hunt for small rodents as prey and food.

Fortunately, owls are not a threat to humans. Most of these avian creatures, even the larger species, will get away quickly and avoid conflict if they encounter humans. Owls will attack cats or dogs though.

But make no mistake, owls, unlike most animals, lack the ability to feel fear. They don’t get intimated easily by the enormous size of other creatures, predators, or otherwise. So, they will not hesitate to attack a human if they feel threatened or if their young are in danger.

Attacks by birds of prey like owls are extremely rare, but they can be dangerous. Most high-profile attacks have been made by Great Horned Owls, Snowy Owls, and Barred Owls.

If you’re hiking or jogging at night in an area where owls live, be aware of your surroundings and avoid disturbing them. And if you see one of these birds flying in the sky or perched on a tree, it may be out to hunt and kill for food. Don’t be curious, and stay away from trees.

What to Do When an Owl Attacks You?

It’s hard to stop an owl attack because they happen so fast. There’s a good chance you won’t hear or see it coming, and the owl’s already gone before you realize what hit you.

That said, here are a few things you can do to protect yourself from owl attacks.

Can An Owl Pick Up a Human Child?

No, most owls are not strong enough to lift anything that weighs more than they do. The largest owls in the world weigh around 6.5lbs, which is lighter than the average newborn baby. So, if a smaller owl tried to lift a human child, it probably wouldn’t be able to.

However, other owl species such as the Great Horned Owl are known to be able to carry off heavier prey if they are hungry – even up to 20lbs! They often feed on prey ranging from voles to jackrabbits and from snakes to skunks, so cats and small dogs aren’t viewed any differently.

Conclusion on Does an Owl Attack Humans

Do owls attack humans? It’s a question that has puzzled people for years. The answer is, unfortunately, yes. Owls will often attack a human if they feel threatened, especially if their young and nests are disturbed. However, this doesn’t mean you have to be afraid of them – just use caution and respect their space if you ever encounter one in the wild.

FAQs on Do Owls Attack People

Are Owls Friendly to Humans?

The simple answer is no, owls are not friendly to humans. In fact, they generally don’t show any affection or emotions towards humans at all. This is because they are wild animals and their instinct is to be wary of people.

However, there have been some reports of owls becoming attached to individual humans, but this is very rare. If you do come across an owl that seems friendly, it’s best to leave it alone as it could be sick or injured.

No, only mammals can be infected with rabies and potentially transmit the disease. Owls are not mammals, so they cannot carry or transmit rabies. If you see an owl that appears to be acting strangely, it is important to contact a wildlife expert or animal control officer for assistance. Do not try to handle the owl yourself, especially if it’s on the ground, as it could be sick or injured and pose a risk to your health.

Yes, snowy owls are known to attack humans, especially during the breeding or mating season when they are protecting their nests. Males are usually the aggressors, but females will also attack if their young owls are threatened.

Like most other owls, these birds can be very territorial and will fiercely defend their territory from any perceived threat. If you encounter a snowy owl, it is best to give it a wide berth to avoid being attacked.

Where Do Most Barred Owls Live in North America?

The barred owl is found in the Northern regions of Carolina, Texas, and British Columbia. These owls are nocturnal hunters and prefer to live in wooded areas near water. Barred owls typically mate for life and will use the same nest year after year.

How Can You Tell the Difference Between a Great Horned Owl and a Barred Owl?

Well, there are a few key things to look for.

Watch How to Survive an Owl Attack

Do Owls Attack Cats and Dogs? 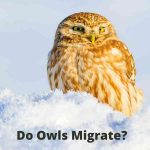 Do you know if wild birds get fleas? What about ticks and other parasites? Find out everything you need to know about bird fleas here!